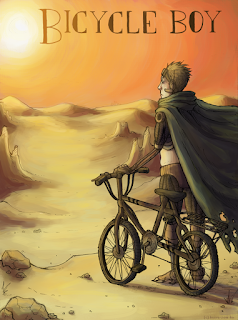 The Story: Bicycle Boy is a post-apocalyptic sci-fi adventure comic by JACKARAIS.
Our protagonist--a cyborg who calls himself 'Poet'--cannot recall anything before the day he woke up in the middle of the desert, surrounded by corpses.
With no memories, no purpose and no idea what the hell is going on, he sets out to find answers.

The Review: Post-Apocalyptic stories have been a staple of popular entertainment for decades. Movies, books, video games, and of course comics, have all features stories where the world as we know it is no more. Perhaps it reflects a subconscious or conscious dissatisfaction with modern society and desire to revert back to a quite possibly harder but more straightforward way of life. Whatever the case, there is plenty to be had. The trade-off to this…it can be really hard to stand out

The addition of the bicycle, the trademark of the entire comic, is a feature that ComicWorm thinks is very special. One of ComicWorm’s favorite video game franchises is the Fallout series and has become the standard by which ComicWorm judges post-apocalyptic fiction. One of the things that has always bugged ComicWorm about the games though is that the wheel is conspicuously absent, which doesn’t make a lot of sense. This actually quite common in popular media about the death of civilization. The bicycle in particular should have stayed around. It make’s perfect sense for such an environment where cars are no longer viable.

The comic gratefully averts this although Poet’s bike appears to be unique. The bike becomes one of Poet’s first friends. That may sound a bit silly but when not one thinks about it. In many stories, the character’s gun, starship, or horse is their best friend.

It does seem that Poet is perhaps the only character who actually possesses a bicycle. However, is actually makes some sense, considering the harshness of the terrain Poet and Machk travel through. Bikes may not need gas but they can’t go over logs and rocks very well.

ComicWorm will admit though, the ‘protagonist with amnesia’ trope has been done a lot across popular media. Not quite ‘done to death’ levels just yet, but is a cliche.

Thankfully, this comic breaks the cliches almost as often as they appear. Oftentimes the amnesiac character has some sort of superpower and as the story progresses, he or she grows into a badass that will rule the wasteland. It may be a bit too early in the storyline for this comic but so far Poet is and remains a bit of a wimp. Even his metallic limbs aren’t that strong and get damaged regularly. He doesn’t really follow the trail of breadcrumbs to unlock the secrets of his past in some exposition riddled panels. Most of the clues so far, are implied and most of the implications are vague.

This is a violent comic, which may turn off some readers but it leads into another area where this comic stands out. Action comics are plentiful but much like action movies, they are light on how injuries to the character actually work. Oftentimes in comics or other popular media, a character gets a black eye or other injury and then in the next panel or episode, they are just fine. All healed up. Almost just as often, they don’t get hurt at all. They get hurled through a brick wall and simply dust themselves off.

Not so in this comic. When the characters get hurt, they get hurt. They bleed, they bruise, their eyes swell up, the get dirty. When they finally crawl to safety, it takes them a while for them to heal up and while they do, they actually start to cry from physical and emotional turmoil. This is one of the places where the skill of artist is showcased. The level of detail is really quite impressive, if a bit stomach churning. The environments make up of this though. Which are gorgeous to look at.

This adds to the gritty realism that this comic is known for. Aside from perhaps the presence of actual cyborgs, this is one of the most realistic depictions of the post-apocalypse that ComicWorm has ever seen. While there is some order, its obvious that this world is only just starting to get back on its feet. It’s a dirty, rough world and most assuredly not the wish-fulfillment fantasy that a lot other post-apocalyptic stories fulfill, Fallout included. Heck, there aren’t even that many guns.

None of the women in this story are hot. In fact, some of them could be mistaken for men at first glance. They are muscular and bullish and also dirty. You could count on one hand the amount of times that a character appears to be clean in any significant manner. It may turn off a few readers over just how hard this world is and how it appears to be devoid of any fantastic elements.

Final Verdict: Bicycle Boy stands out among Post-Apocalyptic fiction, for its verisimilitude of atmosphere and violence. The beautiful artwork and all too human characters, really makes this comic stand out among the vast expanse that the genre that the post-apocalypse provides. 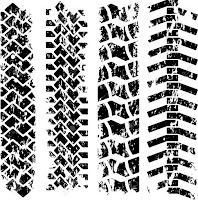