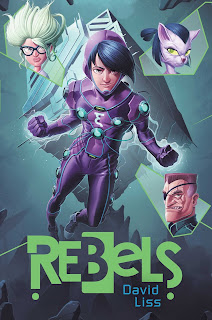 The Story: It’s difficult to return to Earth and live a simple, unadventurous life after having seen the wonders of the universe—especially when you find yourself with Smelly, a self-important artificial intelligence living in your head, reminding you how much of a primitive meat bag you are. But with Smelly’s help, Zeke is on his way back to space on a new, super-secret mission. Zeke may earn Earth a second chance at intergalactic membership—and better yet, he’ll be reunited with Tamret, the alien girl of his dreams.

However, things never go as planned for Zeke. Conspiracy abounds as he’s once again blamed for destroying a spaceship, and sent deep into the dangerous Forbidden Zone to find the military tech tree that the enemy Phands are already using. Will his knowledge of pop culture and science fiction that saved him in Randoms help again?

The Review:  After reading the first volume in the series, Bookworm knew there would be a sequel. With the ending the author unloaded unto the readers, Bookworm wanted there to be a sequel.

The main appeal is once again Zeke and his journey. In lot of ways, there are similarities to his character and that of Harry Potter’s journey in the Order of the Phoenix. In both, the honeymoon period is long over and the cold, merciless grip of reality has closed in. He is increasingly swept in events beyond his control and he wonders even if he should control them. There is a lot of pressure for him to just give up.

One one hand you sympathize with the antagonists of both books. We are talking about the future of every man, woman, and child on the planet Earth.

His allies are of questionable loyalty and/or ability. Indeed, some old characters are unbearably whiny…especially near the climax of the book.

It seems like the series is going through something of an identity crisis. It doesn’t know how seriously to take itself. As stated in the review for Randoms the main problem was the meta-references to Science-Fiction and once again, we run into the same problem. So much so, that it was honestly a bit hard to take the whole thing seriously. The main issue with the text is that is has a problem finding its balance. The story for this book is a lot more serious than the previous volume but the constant nerd chat also gets into self-depreciation levels. It seems at times that this book is serious attempt at science-fiction and then it becomes an attempt at a parody of the whole genre. It is all very confusing. Which leads into the next problem with the book…

The book also suffers from a case of second book syndrome. For the uninformed, second book syndrome, is a phenomenon that occurs in book series where the second volume of the series doesn’t really go anywhere. The purpose of the book is more to introduce more elements that will come into play in later volumes.

Final Verdict: This book is not bad by any means and Bookworm eagerly looks forward to next volume in the series because it sure to be an exciting one. Compared to the first book though, it is lacking is several significant ways that force Bookworm to assign the following rating.

Three E’s out of Five