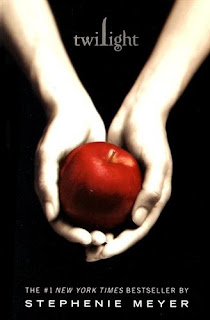 The Story: Isabella Swan's move to Forks, a small, perpetually rainy town in Washington, could have been the most boring move she ever made. But once she meets the mysterious and alluring Edward Cullen, Isabella's life takes a thrilling and terrifying turn. Up until now, Edward has managed to keep his vampire identity a secret in the small community he lives in, but now nobody is safe, especially Isabella, the person Edward holds most dear. The lovers find themselves balanced precariously on the point of a knife-between desire and danger.Deeply romantic and extraordinarily suspenseful, Twilight captures the struggle between defying our instincts and satisfying our desires. This is a love story with bite.

The Review: Well…this is it. The Big One. A book that everyone has heard of and everyone has an opinion about it…

Love it or hate it, no one can deny the impact Twilight had on both popular media and the book industry. Any discussion of popular fiction in the 21st century, Twilight will inevitably crop up, due in no small part that its popularity helped set the stage for a whole genre of books that lasted the better part of a decade.

Some would argue that it was one of the first books in the YA Genre before YA was a thing.

This book and its sequels were New York Times Bestsellers and spawned a whole movie franchise! It must have done something right? Well, let’s find out…

One of the challenges in reviewing a book such as this is that Twilight has become a punchline in creative media circles. It set the stage for ham-fisted romance and spawned several parodies. Taking it as it is can be a problem but this book has several and the main one can be summed up in one word:

Reading this book is like upending a jar of molasses: You do it to watch it go splat against the plate but first you have to get through it slowly oozing out of the jar. That is what the plot in the first two thirds of the book does. It just…slowly oozes and it is a challenge to get through. Things don’t really get moving until the last third, hence the ‘splat’, but even that is lackluster.

The majority of the this book is simply Bella being a depressed high school student and thats it. Bookworm did not like all that high school stuff even when he was in high school! Bookworm likes it even less now! Its boring!

To the author’s credit though, the boring high school stuff did seem authentic. Bookworm really could feel Bella’s isolation, awkwardness, and confusion of the strange new paradigm she was thrust into. Being a teenager is not all that fun. It involves growing up at much faster rate and it is very confusing to navigate such changed waters. That is most likely a major factor in the book’s success, it nails the depressed, teenage girl motif right on the dot. Bella is not very happy with her life, even though she chose it, but she is not really certain what will make her happy. This is a common theme in YA fiction and some would say the overall theme of the entire genre. The ever common dystopic setting serves, in addition to social critique, as a metaphor for the strange world of quasi-adulthood that sixteen year olds find themselves in.

If you are not a lonely, depressed, teenage girl, this characterization has very little to offer. There were a lot of parts where Bookworm was sorely tempted to just flip ahead to a more interesting section. The pacing again is just so poor. We get it, Bella feels out of place among the ordinary girls of her high school and is unaccustomed to being attracted to by boys, we do not need to spend half a dozen chapters extrapolating on that point!

It is stated throughout the book that Edward Cullen is like stone. They are referring to his physique and Bookworm is referring to his personality. He is probably one of the most boring male leads Bookworm has ever read. Part of the reason that Bookworm wanted to see this book through to the end was he did get into the ‘mystery’ of the Cullens and for Bella and Edward to finally do something about their obvious attraction. Alas, what we get is something that can almost be called an anticlimax. Edward and Bella’s declaration of love comes and departs without so much a passionate kiss scene and the lore of the vampires leaves hardly anything to sink your teeth into.

The writing is not terrible. Nowhere near as bad as another punchline worthy book, Fifty Shades of Gray. (Seriously, Bookworm put that one down after reading the first sentence.) It is however, exceedingly amateurish. YA has often been disregarded by ‘serious writers’ (whatever that means) for its writing and this book does not aid in dispelling that notion. It reads more like the work of a talented writer of fanfiction. The reader can tell that, like fanfiction, there is some heart to it that makes the reader forgive the lackluster writing but here it can get very distracting. The author does not get very adventurous when it comes to dialoguing and some attempts to do so fall flat.

While not the torture session he envisioned, this escapade into the world of sparkly vampires was not a pleasant experience. It offers next to nothing for anyone other than teenage girls or people who want to be teenage girls.

Two Garlic Bulbs out of Five