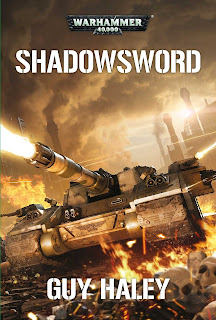 Superheavy battle tanks go to war in this explosive action-thriller.

Arriving in the Geratomro warzone, Honoured-Lieutenant Bannick and the crew of the Baneblade Cortein’s Honour are assigned as close support to a company of Shadowsword Titan-hunters as they find themselves thrust into a deadly battle for the fate of three star systems. New and deadly allies throw into doubt all that Bannick has been told of the Imperium, threatening not only his life, but also his soul…

****
The Review: A sequel to the novel Baneblade also by Guy Haley, once again takes the readers into the mechanical bowels of one of the Imperium’s innumerable tanks commanded by Lo Bannick and his crew who make their return from the previous volume.

One of the best aspects of the text is the descent of one of the POV characters into heresy. The word heresy is so prevalent in volumes of the Black Library, that it could be used as a drinking game. The consequence of this, though, is the over saturation of the term to the point where it loses meaning. Heretics are just the bad guys, the dragons for the hero to slay.

The character of Dostain, one of the monarchs of Geratomro was a pleasant surprise. He adds a touch of humanity to the whole ‘corruption’ business. We rarely see the heretics before they actually become heretics. His descent into darkness feels very authentic and while reading it, Bookworm finds himself saying, “Don’t do it Dostain! It’s a trap!” What it also does is really enforce the insidiousness of the Warp and why the Imperium has such an iron fisted, zero tolerance approach to the whole business. It so much subtler than we expect and in a way is relatable to ‘corruption’ in the real world. A little here and a little there, but it can doom worlds in the 41st Millennium and as a result: the scorched earth policy against it.

This book works because it incorporates several elements of the Warhammer 40K Universe that to Bookworm are the best things about the universe.

One of the best facets of the entire Warhammer 40k is how it is such a visceral, graphic universe with metaphors and adjectives piled upon one another to such an extent that in any other universe would seem positively ludicrous, being so over-the-top. In Warhammer it all seems to fit together, vis a vis the world the Geratomro just oozes with such character. The manner of which the nobles are described i.e. Dostains family is just saturated with detail and character without ever venturing too far into exposition or plot dumps. This world is allowed to grow and blossom right before our eyes in a way that feels authentic even though the setting is so fantastical. Furthering the author’s skill with world building is the diverse range of emotion that the writing conjures. Disgust is particularly strong with the Geratomro royal family but awe, dread, excitement, and even drama are all crafted around the reader.

The alternate facet is Bannick and his crew. Bookworm has stated multiple times that for all its melodrama, Warhammer 40k is one of the most human franchises he has ever encountered. As much fun as the Space Marines are, it always fun to see normal humans face down the terrible foes of the Imperium of Man. There are merely people trying to get the mission done and they retain this mindset throughout the book even as more ominous events start to take shape around them. Speaking of Space Marines…one of Bookworm’s favorite events takes place in this volume: Space Marines and Mortals, particularly the Black Templar Adelard and the crew of the Baneblade. It is constantly referenced that Space Marines are trans-human and differ in several fundamental levels from normal humans and as a result, mostly look down upon them. In this case Brother Adelard regards Lo Bannick as an equal and critical to the success of the mission. It’s actually rather touching despite the serious circumstances. It touches upon the common humanity that makes Warhammer 40k so compelling.

If there is any flaws to be had with this tome, one of them would be that it may be a bit excessive, even for Warhammer. Simply put: the story never stops. It grabs the reader by the collar and drags them full speed ahead right to the end. The reader rarely gets time to breathe during the whole escapade. The POV chapters, thankfully, never get too excessive but they go by at nearly hyper speed as the book nears it’s climax.

Some lines of dialogue may make some readers roll their eyes, but histrionic speech is part and parcel of the grim darkness of the far future so most readers of this franchise will learn to expect such writing.

Needless to say, this is not the best place for Neophytes to begin their saga in the Imperium of Man, it is a lot to take in one sitting.

Final Verdict: Shadowsword is a worthy addition to the Black Libraries shelves. While all Black Library tomes are well written as a general rule, Shadowsword stands out as one of the best crafted that Bookworm has encountered in quite some time. It is easy to see why Guy Haley is among the Chapter Masters of the Black Library

Four Shadowswords out of Five