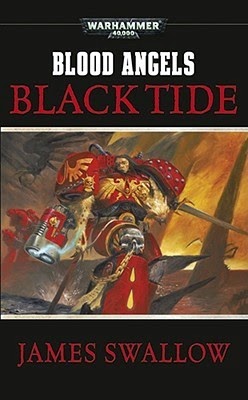 The Story: Having prevented the ferocious Bloodfiends from bringing disaster to their homeworld of Baal, the Blood Angels go in search of the renegade who almost destroyed them - Fabius Bile. Tracking the Chaos traitor down to his secret base on Dynikas V, a world beset by alien tyranids, the Blood Angels find horrors more terrible than even they can imagine. And with a sample of primarch's blood in his possession, the Blood Angels must discover what nefarious plot Fabius Bile is bent on. (From amazon.com)

The Good: Once again we embark on another thrilling adventures of the Blood Angels Chapter of the Adeptus Astartes. The last adventure was in the halls of the Blood Angels Fortress Monastery and now we head out into the blackness of space to take the fight to the Lords of Chaos. Already opportunities for world-building and action packed fight scenes present themselves and we are not disappointed. Rafen is an excellent character in how human he is and in his determination are very compelling. There are many similarities between him and the character of Uriel Ventris from the Ultramarines series by Graham McNeill.

The Adeptus Astartes are undoubtably one of the coolest parts of the Warhammer 40K Universe and we see another aspect of them which was what made the the previous book so enjoyable: Interactions between alternate Space Marine Chapters. The squad of Blood Angels is once again joined by a squad of Space Marines from the Flesh Tearer’s chapter, a successor of the Blood Angels Legion. We also meet other Space Marines who are prisoners of Fabius Bile and being used as fodder for his experiments. One in particular, Tarikus of the Doom Eagles, is an interesting character who gets his own short story later on.

But what really is a great character is Fabius Bile. He is a perfect villain due to the fact that he is so utterly despicable makes him a lot of fun. A rogue apothecary from the Thousand Sons, Traitor Legion, he is known for committing brutal biological experiments across the galaxy with the goal of creating the perfect warrior. A key to making a good villain is either to make him really human or go the opposite direction make him or her a monster that totally lacks sympathy. The latter is what the author does and he does it to great affect.

The Flaws: The main flaw of this book is that it ends on something of a cliff hanger and in order to truly see the story to its very end, one has to purchase or otherwise acquire a copy of the Redeemed e-story from the Black Library website. Not that Bookworm is against ebooks but it can seem like a bit of a money grab to nickel and dime readers so they can see the end of their favorite stories. You should definitely buy a copy of said stories but still…

As Bookworm’s Warhammer Library increases, a flaw within the franchise tends to show up a lot more frequently and that is the homogenization of the antagonists. As stated in another Warhammer 40K review about the Necrons, the forces of chaos can become kind of dull after reading several stories about them. All the forces of Chaos in many books are almost exactly the same, that being: blood, guts, human skin, horned monsters, twisted parodies of life. Very gruesome and indeed an affront to all that is ordered but it never seems to change. Chaos is more than just carnage, it is also confusion and discord. We just need a little more variety in the enemies of mankind, more than just introducing a new one with the new codex. Diversity is what is needed.

While Rafen is a good character, he does come off as a bit of Gary Stu. He is a little too Clark Kent-like at some parts and that can turn off readers looking for more complex protagonists. The same goes for the other characters, such as Turcio and the Flesh Tearers. They are one dimensional and as Bookworm finds while writing this review, not very memorable.

In the end…the main problem with this book was that the other books in the series felt unique whereas this book feels like rather generic.

Final Verdict: A good way to wrap up the Blood Angels series but it is not quite as memorable as the other volumes. Bookworm genuinely hopes that we see more of the Blood Angel Rafen in future adventures of the Imperium of Man.