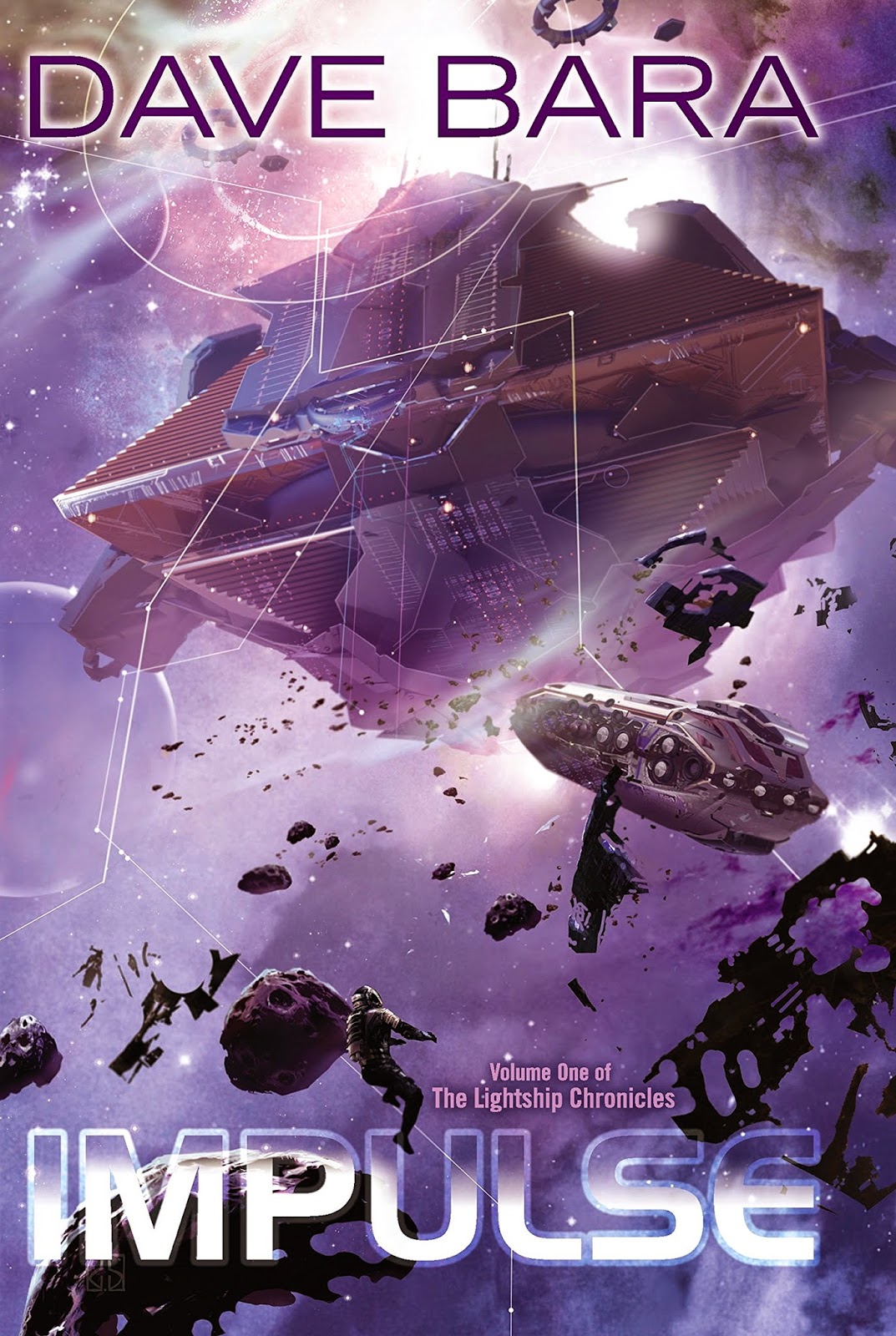 Impulse: The Lightship Chronicles Book One

The Story: Lieutenant Peter Cochrane of the Quantar Royal Navy believes he has his future clearly mapped out. It begins with his new assignment as an officer on Her Majesty’s Spaceship Starbound, a Lightship bound for deep space voyages of exploration.

But everything changes when Peter is summoned to the office of his father, Grand Admiral Nathan Cochrane, and given devastating news: the death of a loved one. In a distant solar system, a mysterious and unprovoked attack upon Lightship Impulse resulted in the deaths of Peter’s former girlfriend and many of her shipmates.

Now Peter's plans are torn asunder as he is transferred to a Unified Space Navy ship under foreign command, en route to an unexpected destination, and surrounded almost entirely by strangers. To top it off, his superiors have given him secret orders that might force him to become a mutineer.

The crisis at hand becomes a gateway to something much more when the ship’s Historian leads Peter and his shipmates into a galaxy of the unknown -- of ancient technologies, age-old rivalries, new cultures, and unexpected romance. It’s an overwhelming responsibility for Peter, and one false step could plunge humanity into an apocalyptic interstellar war….

The Good: It is military science fiction space opera that follow’s in the footsteps of Honor Harrington. Peter Cochrane is a well written character that reads very realistically. The way he acts as the second son of a noble family seems authentic. The young buck on the important mission who gets in over his head is not a unique story but then again some would say there is no such thing as a truly original story. Anyway, he already knows his way around diplomacy but is still trying to find is way in a universe that has gotten much bigger.

The relationship he has with his father is well-done. Being both a noble and military commander there is some understandable distance between him and his son but it is clear that they care deeply for one another and the death of their loved one has greatly affected them.

The author’s creativity is best exemplified by the sheer amount of back story that the reader is introduced to. We learn about a vast galaxy made up of a variety of aligned and non-aligned factions such as the Quantar and the powerful humans from Earth. There is a rich history to be had here and its makes the reader eager to explore more. The fact that the ship the main character travels on in so luxurious is a unique wrinkle on space opera.

While, almost predictably, there is a bit of a romantic angle between Peter and Domina, another character. The two flirt to a significant degree as there is a great deal of tension between them in the last third of the book. Minor spoilers but the two do not jump into bed at the end of book which really works in the books favor as it sets things up for the sequel.

The Flaws: Unfortunately, there is a great deal that is flawed with this book and the majority of them are very glaring problems.

The author creates a very interesting world but it leaves out a great amount of worldly constructs. In the last third they crew of the ship visits a long lost colony of humanity but aside from knowing that the world is ruled by a monarchy we don’t see anything of what the world is like. Reciting a history of a government is all well and good but that is not what is needed to immerse oneself in a world. We need to see what Earth cultures the architecture emulates. What kind of paintings are hanging on the wall? What is the food like? (very important!) What kind of clothes do they wear? What does the planet smell like? All of this and more helps build the atmosphere of the world and makes it feel more real. This planet did not feel real

Something tells the worm that the author is a student of history and his enthusiasm for said topic bleeds to much into the text. A purpose of a novel is to tell a story with characters not recite a history of a universe not matter how interesting it may be.

This is obviously a military science fiction, but that kind of story requires research and that fell flat in regards to the military aspect. It is never made clear exactly how it all functions. The ranking system seems nebulous and the way they act does not really seem like that of military vessel. More like a band of professional explorers, which would be pretty cool.

What this book lacked ultimately was refinement. The author has a lot of good ideas but the execution was lacking in a significant manner. The backstories are fascinating but what drives a story are characters and plot which were not well handled in this tome.

Final Verdict: While Bookworm may indeed purchase the sequel, he sincerely hopes that the author will have refined his craft and the make the book much more enjoyable. It has a lot of potential.