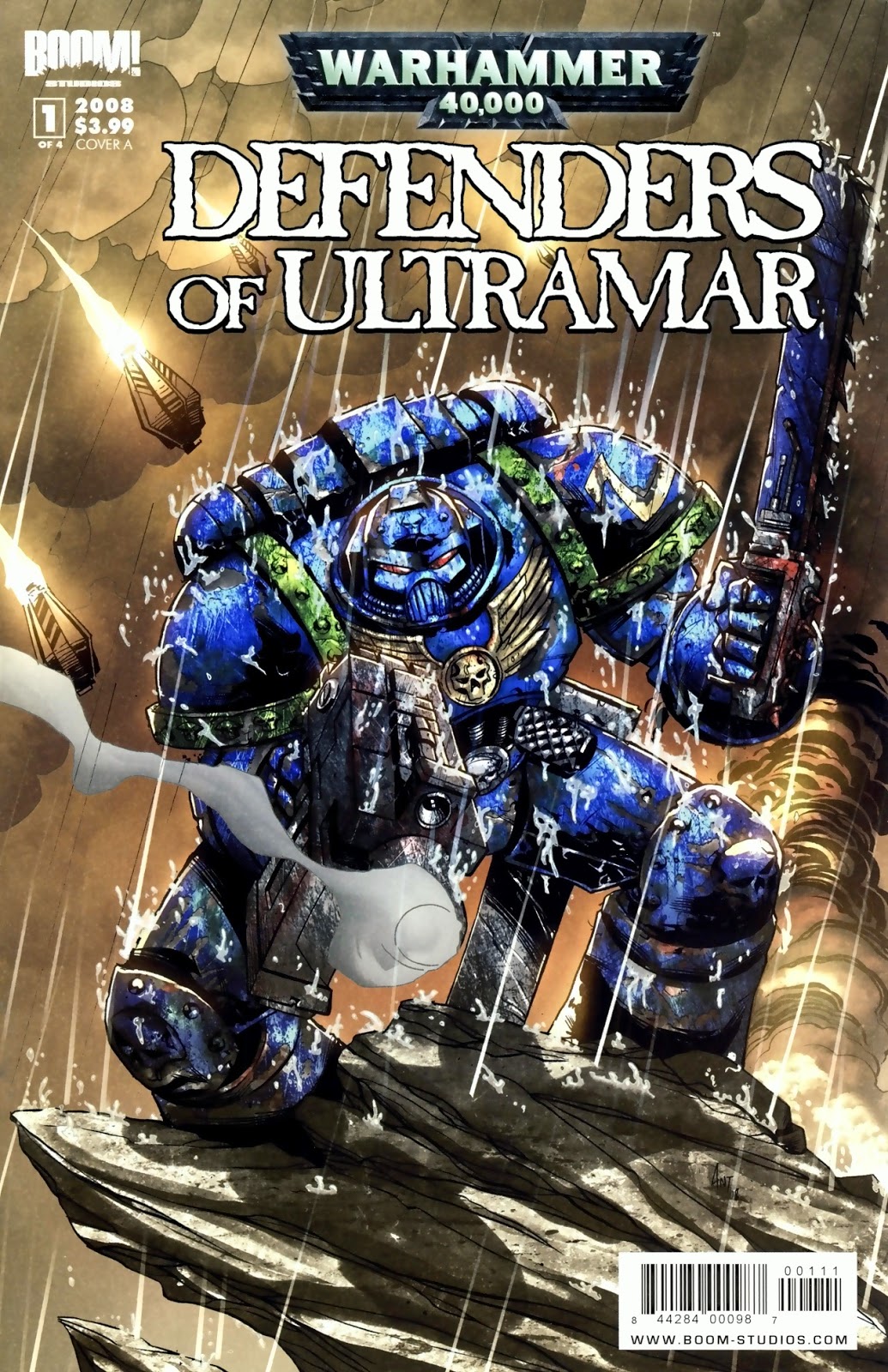 Defenders of Ultramar by Graham McNeill

The Story: Discover one of the fiercest fighting Chapter in the Universe: The Ultramarines 4th Company. Sergeant Learchus must take twenty-five new recruited Battle Brothers on their first engagement, as they embark on an investigation of the lost patrol ship Guilliman’s Honor. What was a routine mission becomes much more when 4th Company, encounters one of the Imperium’s deadliest enemies!

The Good: Its the freakin’ Ultramarines! We get to see the Adeptus Astartes in full-color action. What more could one ask for? To actually see visual representations of Marneus Calgar, Sergeant Learchus, Judd Clausel, and an Ork Gargant is a real treat for any fan of Warhammer 40K.

The artwork is superbly crafted, with a keen but not overwhelming attention to detail. When reading, one can feel the action and the gunfire and the zeal of the Ultramarines when battling the fearsome Orks! The Orks are a very fun villain in the Warhammer 40k Universe, with their fairly cartoonish appearance and their ramshackle technology. There is no clash of ideals, no chaos, just a no-holds barred, shoot-em up adventure, with all the bullets and explosions anyone could want.

While there are definitely some serious moments, the whole story is a ton of fun and pretty straightforward, and thats okay. Not every story needs subtlety. Its okay to just have fun.

Blood and Guts are practically a hallmark of Warhammer 40k, but this time around it does not go all out, save for one scene with corpses chained to the front of an Ork war machine. This is a wise choice by the creative forces behind this work as going all out could turn off newcomers to the franchise.

The story also provides the reader with small amounts of background information, such as Space Marine terminology, which really helps put what is happening during action sequences, such as the differences between devastator and terminator squadrons.

What makes this story so good in the end is not just the action but the characters. Learchus demonstrates great wisdom as a leader and demonstrates the concern for the common man that is always so touching to see from the Astartes. This is Learchus’ story and to see him grow into a Captain from beginning to the ending is a great story.

The Flaws: The first major flaw about this graphic novel is when and where it takes place. The story directly references events that take place in the Ultramarines novel series also by Graham McNeill, those events being Captain Uriel Ventris’ and Pasanius Lysane’s violation of the Codex Astartes and subsequent exile to the Eye of Terror. ComicWorm knows about these events but the common reader might not, so it makes the setup of the story a little confusing.

Another problem with the formatting is a common problem that comic series have: the use of different artists for different chapters, no pun intended. While they thankfully keep the character appearances and overall aesthetic consistent, it is a little jarring to see the art take a different direction with every new phase of the story.

Another problem with consistency is the portrayal of 4th Company Chaplain Judd Clausel. While physically, he looks pretty much the same in every chapter, the artists at times, overlook a key detail. In Warhammer 40K, it is a known fact that Chaplains of the Adeptus Astartes wear black armor and in some chapter’s Clausel is portrayed as wearing blue armor with little to separate him from other Ultramarines. It is not that big a deal but it is one of those things that can irk a member of the fan base and irks can add up. It’s important to get details right.

Sometimes the character’s can come off a little flat at times but that kind of exploration is not really needed in an action story such as this.

Final Verdict: Defenders of Ultramar is a terrific comic and definitely a worthy addition to anyone’s personal Black Library. ComicWorm hopes Learchus gets a novel of his own someday.