ComicWorm Speaks!- The Evil of Oz 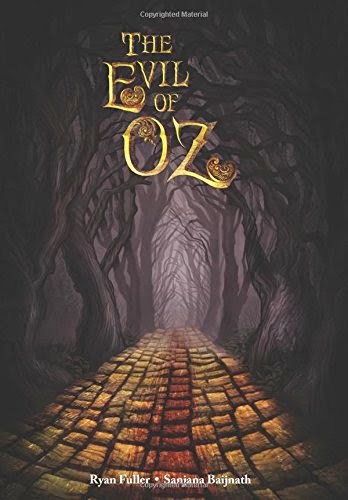 The Evil of Oz

by Ryan Fuller and Sanjana Baijnath

This volume was acquired for free in exchange for an honest review through Word Slinger Publicity.

Warning! This review may contain spoilers!

The Story: A horror sequel to L. Frank Baum’s The Wonderful Wizard of Oz. Journey with Dorothy through a much darker vision of Oz. On a dark and stormy night, the family of Dorothy Gale is found brutally murdered with an axe. Dorothy is the sole survivor. Summoned back to the land of OZ, Dorothy finds the land corrupted and its inhabitants given into madness. Dorothy must retrace her steps through the dark land and find the one behind the curtain once more.

The Good: The artwork of this books is really quite superb. The way it stands out is how it combines realism, (Dorothy’s and the Wizard) with the exaggerated, stylistic depictions of the other characters like the Munchkins and the Tin Man. The way that they draw blood is kind of interesting. Different from other depictions of blood. They gave is a bit more substance instead of splashing red color on the page. Of course at some points, it looks more like red jelly, but maybe that’s what blood really looks like.

At first: ComicWorm did not much care for this tome. Just another blood soaked gore fest that shares some names with a decades old movie. While reading it all the way through though, there is something deeper to be had here. The parts when Dorothy must battle her old friends, elements of Shakespearean tragedy can be seen. They got exactly what they wanted and it allowed the darkness within them to destroy them.

The Tin Man discovered a heart and with it he discovered love but then there is love’s other side: hatred and then anger and then greed. All emotions, all that come from the heart.

The Cowardly Lion discovered courage and with it the bravery needed to stand up for himself. It’s also too easy to be too brave. By no longer caring about the opinions of others, he stops caring about what they say…or how they feel. Its much easier to be cruel than to be kind.

The Scarecrow: Much like God when He forbade Adam and Eve to eat the fruit from the Tree of Knowledge and they were exiled from Eden when they disobeyed, so is the tale of the Scarecrow. Ignorance is bliss as they say and the Scarecrow was as blissful as he could be without a brain. When he gained the brain, he gained knowledge alright. Knowledge of such things as power and fear and cruelty.

And Dorothy was forced to destroy the land she once loved.

And thus the tale of tragedy was told.

The Flaws: The fact that its the umpteenth “darker and edgier sequel/remake” is the biggest turnoff for the Worm in the case of this book.

The beginning especially, is difficult to get through. To be completely honest, it is something out of a bad fan fiction written about the Wizard of Oz. Blood and gore can get really old, really fast if the writer does not strike a balance fairly quickly. While it is important to remember that the original fairy tales and classic stories like the Wizard of Oz or Snow White were actually much darker than the sanitized movie version would lead one to believe, the grimdakr motif that dominates pop culture during this time period, is getting extremely tiresome. If one wants darkness just open a newspaper or turn on the 24 hour news. For the Worm at least, reading is a way to escape the real world. This books did not provide that for him.

Another thing: People have really got to get over their obsession with the Wizard of Oz! Yes, the movie is considered a legend from Hollywood’s Golden Age. Yes: It has had a tremendous impact on popular culture, but its been done over and over again from other graphic novels to a television miniseries. There are other movies out there! Why can’t we do a darker and edgier reboot of Mary Poppins!? That could be interesting!

Final Verdict: Personal Rating is a 2 out of 5 because The Worm did much care for it but recognizing the skill and subtext lends the final verdict at a solid…